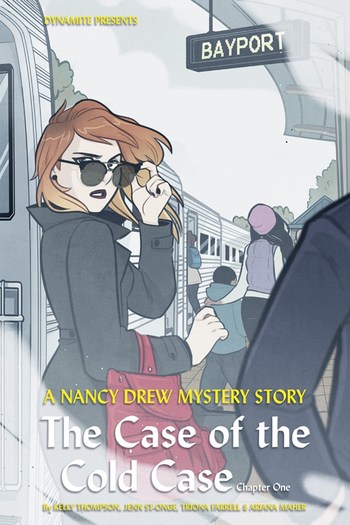 Nancy Drew: The Case of The Cold Case (renamed The Palace of Wisdom for the trade paperback release because Dynamite felt the name was too confusing) is the second comic book adaptation starring Nancy Drew, published by Dynamite Comics. The series is a Setting Update of the original series that sees Nancy return to her hometown of Bayport after getting a threatening letter. Once home, she reunites with her two best friends Bess and George, along with The Hardy Boys, and ends up unearthing a decades-long mystery. Solving the case will take the help of her friends and a mysterious newcomer, and she'll need all the help she can get — getting close to the truth may end in her death.

The series is written by Kelly Thompson (of Hawkeye: Kate Bishop fame) and penciled by Jenn St-Onge. Unlike most Nancy Drew media, the series skews more Young Adult but still keeps the spirit of the original novels.

The first five issues were released through 2018 and collected in trade in 2019. As of 2019, the series is on indefinite hiatus, due to Thompson's exclusive contract with Marvel Comics.