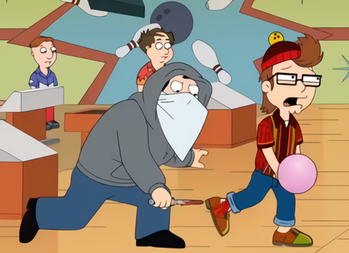 "This is bowling. There are no rules."
"Once there was this girl who
Swore that one day she would be a figure skating champion
And when she finally made it
She saw some other girl who was better
And so she hired some guy to club her in the knee cap"
— "Weird Al" Yankovic, "Headline News" (see the Real Life folder for the incident this is referring to)
Advertisement:

Sometimes someone is just too good at something. There is no way you can beat them at it. Or they have humiliated you once too often in their field of expertise. You decide to fix it so they can never beat you ever again.

Sometimes the opponent to the crippled competition isn't actually the one who did the deed and said opponent may not even have desired it. In these cases, the person responsible for crippling the competition generally is either a misguided fan trying to help, or a third party that stands to gain from a certain outcome of the match.

When applied to superpowered beings, this trope may lead to them being Brought Down to Normal.

Often overlaps with Fingore. Frequently leads to Throwing Off the Disability. A Sub-Trope of Removing the Rival. It's commonly the purpose of Unnecessary Roughness unless the roughness has no purpose and is just For the Evulz.

Different from Make an Example of Them, where in some cases the victim's punishment might deliberately target their ability to perform, but the motivation is not the fear of competition. For example, this trope would be a bunch of mobsters might break the legs of a championship marathon runner so the guy they're betting on will win, whereas, with Make an Example of Them, the mobsters break the marathon runner's legs because he failed to pay his gambling debts.

Note that in real life this can backfire, especially in team sports, where a player getting taken out can encourage their teammates to step up their game. Some coaches even tell their players to "punish them on the scoreboard" rather than physically retaliating.

Not to be confused with Blasting It Out of Their Hands. If the person being crippled attempts to compete or fight anyway, this may lead to You Can Barely Stand. And if the person tries to compete despite the attempted crippling, you can always Attack the Injury during the competition to make sure it pays off.

Note that his answer was completely different in the book.

Superman vs. The Flash

Superman and The Flash are getting ready to do a foot race, but Superman quickly gets worried that the Flash will outrun him, so he shoots the latter in his leg.

Superman vs. The Flash

Superman and The Flash are getting ready to do a foot race, but Superman quickly gets worried that the Flash will outrun him, so he shoots the latter in his leg.