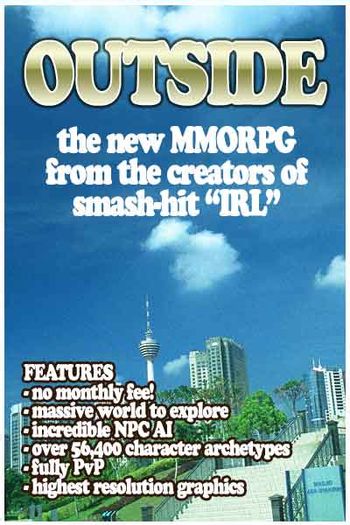 “Reality is that which, when you stop believing in it, doesn't go away.”
— Philip K. Dick
Advertisement:

That dull, brown place you visit when you're not traversing time and space, questing to destroy a ring, slaying vampires, doing science, dressing like a flying mammal to fight a clown, or attaching balloons to your house to fly to South America.

Best known for being the sole work in a completely different medium of its own, called "Reality". Surprisingly good graphics for a legacy system. For a work that's apparently taken a damned long time to develop before release to the general public, it ought to be good.

Supposedly contains the Daystar, that terrible orb that burns you and gives you cancer. Sometimes considered an inaccurate reflection of the true world of fiction. Recommended as part of a balanced diet. Beware of characters who end up here.

Also the name of a webcomic whose actual connection to real life varies. "Varies" having the meaning here of including Time Travel and Humongous Mecha. Not to be confused with a One-Hit Wonder band from The '80s with the same name, famous for the song "Send Me An Angel".

Suffers from a large case of pay to win.

A not-infrequent source of accounts of Muse Abuse, in-universe or otherwise.

Holds the world record for the longest-running series of all time. It is unlikely to be cancelled anytime soonnote There have been some fakeouts in

, but we won't know if it's coming soon until the time comes; even though it has been critically panned and ratings continue to fall.

See also: Truth in Television. Do not confuse with similar Realism.