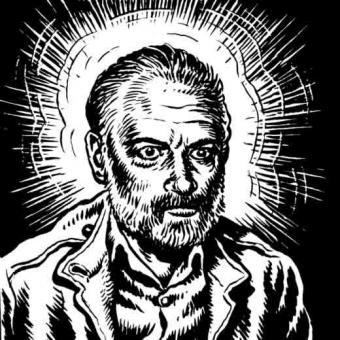 The Notorious P.K.D.
Sometimes the appropriate response to reality is to go insane.
— VALIS by Philip K. Dick
Advertisement:

Philip Kindred Dick (December 16, 1928 – March 2, 1982) was an American Science Fiction author who wrote many influential novels. Throughout his life, he suffered from severe hallucinations and a distorted view of reality. His novels reflect this, and his writing made him one of the most beloved and most critically acclaimed writers in the sci-fi genre.

Dick has said his writings revolve around two questions:

Dick's characters typically spend much of his work wondering who they are, and whether their memories are real or fake. His stories often dealt with reality as illusion, Gnosticism, crazy people, drugged up people, people who seem crazy but are in fact drugged up, people who seem drugged up who are in fact crazy, Mad Oracles, drugged up oracles, reality going crazy, reality going on drugs, government conspiracies, evil corporations, simulacra, Cosmic Entities, Eldritch Abominations, and enough combinations of the above that a permanent state of Mind-Screwed-ness becomes an occupational hazard for his readers. Twist endings and world-shattering revelations are also characteristic of his work, reflecting what can only be described as his rich inner life. Similarly a common theme in his works is a comparison between an objective "Real" reality and a subjective "Perceived" reality, debating the dividing line between the two and whether it is even worth contemplating the difference; a theme that reflected his own mental state.

He is known for writing some of the first Grey Goo stories and for writing about Postmodernism before it caught on in the academic world. He wrote serious existential and theological treatises within the context of futuristic science-fiction stories, when science-fiction novels were still in their infancy and considered as childish and peripheral by the majority of the literary world. He was one of the first authors to use fantasy and science-fiction to discuss taboo and socially risqué subjects, contemplating ideas that wouldn't be discussed in mainstream academia for decades. He mixed, deconstructed, and reconstructed philosophical and psychological ideology from everything from Carl Jung and his theories on collective consciousness through to Jean-Paul Sartre and his theories on individualism, constantly searching to define and challenge reality and the human mind. Some of his stories have been cited by big-name philosophers like Jean Baudrillard and Slavoj Zizek.

He wasn't particularly popular in the United States during most of his lifetime, but he gained a following in France among the intellectual set; his bizarre works meshed nicely with the postmodern philosophy then current in French academia.

Around 1974, Dick began to have odd revelations/hallucinations,

with the entity formerly known as God. Many think he suffered from schizophrenia, a possibility Dick himself acknowledged and wrestled with. He became increasingly paranoid, at one point alleging that the KGB or the FBI stole documents from his house (he did, in fact, come home one night to find one of his filing cabinets forced open); later, he suggested that he might have broken into his own house and then forgotten about it. Many suspect his later novels are so confusing because he was trying to work out these problems in his writing.

Hailed as "The Godfather of Science Fiction", he has a strong cult-following pan-globally which has been growing since his death in the early 1980s, encouraged by the relevance that a lot of his works have to modern day society. A lot of his more thought-provoking works continue to be the subject of analysis today.

Many of his stories have been adapted into movies. Some turned out good (A Scanner Darkly, Blade Runner, Total Recall (1990), Minority Report, The Adjustment Bureau) and some received a more mixed reception (Next, Paycheck, Impostor, as well as the TV series The Man in the High Castle). His largest work is to date unpublished save a few excerpts

- over 7000 pages of notes speculating on Greek philosophy, early Christianity, theology, mental illness, and the implicate structure of the universe itself. This work, titled the "Exegesis," spans thousands of years of metaphysics and occult literature. Written during the final few years of his life, it is either his greatest triumph of skeptical empiricism or a deep descent into incomprehensible insanity.

Despite being a contemporary of the New Wave Science Fiction cohort, he is not generally considered one of the authors associated with that trend during The '60s and The '70s. They were not widely associated with "weird" as much as they were associated with new literary sensibilities. And PKD works are regarded more for the raw ideas than they are for their literary style and polish.

For the newly prospective or particularly insane reader, as a lot of PKD's works were guided by the Reality Subtext of his life, reading his works in the order they were published (or written) from oldest to most recent gives probably the best overall understanding of the development of his mind and ideas over time.note With the added advantage that it prepares the reader for the continuously escalating levels of Mind Screw and paranoia that occur in his later books. However, be warned that trying to read them all in progressive succession may break your mind. Literally.note No, seriously. Have some stuff by Descartes or Kant lying around to help prove to yourself that you exist if you try this.

Years of drug abuse (which inspired A Scanner Darkly, where he lists himself as a victim of this, and possibly fed into those weird thoughts detailed above) led to his death in 1982 of heart failure at age 53.