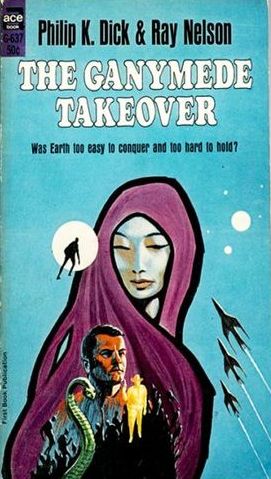 The Ganymede Takeover is a 1967 science fiction novel by Philip K. Dick and Ray Nelsonnote The latter wrote the story They Live! is based on. Word Of God later admitted that it was originally meant to be a sequel of The Man in the High Castle chronicling the Imperial Japan conquest of the United States.
Advertisement:

Earth has been taken over by aliens from Ganymede, the largest moon of Jupiter, who are now attempting to stamp out the last of the human resistance.