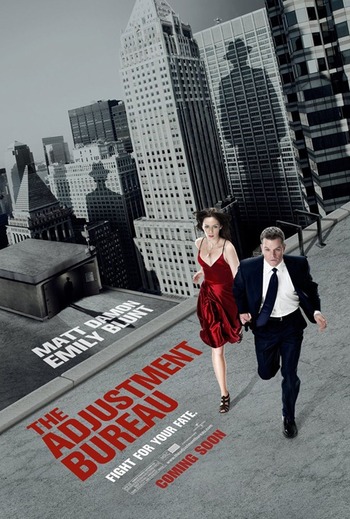 David Norris: Who the hell are you guys?
Richardson: We... are the people that make sure things happen according to plan.
Advertisement:

The Adjustment Bureau is a 2011 film based on the Philip K. Dick short story "Adjustment Team".

David Norris (Matt Damon) is a charismatic Congressman whose campaign for Senate is derailed by a last-minute press leak. He practices his concession speech in the men's room, not realizing that he is being overheard by Elise (Emily Blunt), who is hiding from security in one of the stalls after crashing a wedding. She eventually owns up to being there, and the two have a romantically-charged conversation that ends in a passionate kiss. Afterwards, he abandons his planned speech for a heartfelt and impassioned tirade that propels him to the forefront of public consciousness, earning him strong support for the next Senate election.

A short time later, David runs into Elise on a bus and gets her phone number. However, when he gets to his office, time is frozen and he is accosted by a cabal of suit-clad, hat-wearing men who knock him unconscious and teleport him to a mysterious warehouse. The men explain that they are the people who make sure things happen as they are supposed to, and that he must not see Elise again (burning the paper with her number, which he had not memorized).

Three years later, David finally finds Elise again, reconnects with her, and decides that he's going to be with her, no matter what the mysterious cosmic bureaucrats say. But it won't be easy...