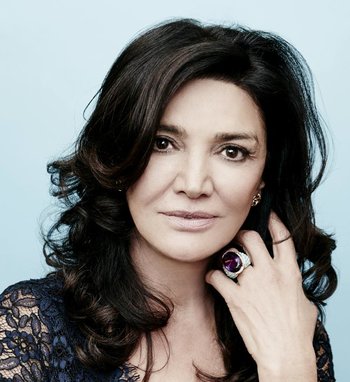 Aghdashloo is known for her prolific career in film, which began in her native Iran during The '70s.

It wasn't until the 2000s, however, that Aghdashloo began receiving international attention. She appeared in the 2000 film Surviving Paradise —the first English-language Iranian film to be distributed in the United States— and her performance in 2003's House of Sand and Fog earned her an Academy Award nomination for Best Supporting Actress.

Because of her ethnicity, Hollywood often casts Aghdashloo as minor characters of Middle Eastern and/or Persian descent (and in one case, Indian) but that's steadily changed over time. Many of her roles throughout The New '10s have been in genre-based (usually Science Fiction) works like Star Trek Beyond, Syfy's The Expanse, and Netflix's Marvel series The Punisher (2017).

She's also known for her deep, sultry voice, which has lead to voice acting roles in projects like the Destiny and Mass Effect video game franchises, and Percy Jackson and the Olympians: Sea of Monsters.