Film / The Stoning of Soraya M. 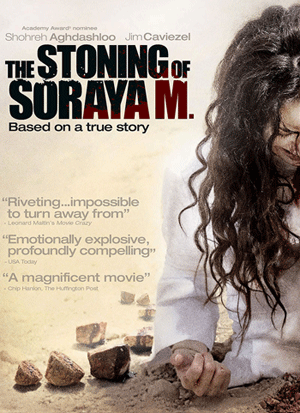 The Stoning of Soraya M. is a 2008 American Persian-language drama directed by Cyrus Nowrasteh. The film is an adaptation of French journalist Freidoune Sahebjam's best-selling novel "La Femme Lapidée" (1990) which in turn was Based on a True Story.

Stranded in a remote Iranian village, a French journalist is approached by Zahra, a woman who has a harrowing tale to tell about her niece, Soraya, and the bloody circumstances of her death the day before.

As the journalist turns on his tape recorder, Zahra takes us back to the beginning of her story which involves Soraya’s husband, the local phony mullah, and a town all too easily led down a path of deceit, coercion, and hysteria. The women, stripped of all rights and without recourse, nobly confront the overwhelming desires of corrupt men who use and abuse their authority to condemn Soraya, an innocent but inconvenient wife, to an unjust and torturous death.