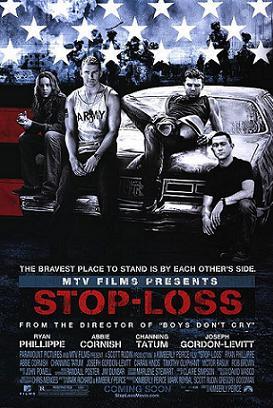 Stop-Loss refers to a controversial government policy where soldiers reaching the end of their service have their contracts extended by their superiors. This is exactly what happens to Staff Sergeant Brandon King (Phillippe); just after celebrating that his upcoming discharge, he is informed that he must immediately report back to Iraq. Refusing to go back, he goes AWOL in the hopes of changing his situation. It soon becomes clear that his only options are either to re-enlist and serve his extra time, or live as a fugitive for the rest of his life. The film also delves into the psyche of numerous young men who enlisted in the military after 9/11 and the effects their decisions have on their lives back home.

The film originally began its life as a documentary - Kimberly Peirce travelling the country and interviewing various soldiers about their reasons for enlisting and their thoughts on the Iraq war. Along the way she decided to instead make it as a feature film, creating characters based on the various people she interviewed. Despite favourable reviews and MTV backing it, the film only made half its budget back.