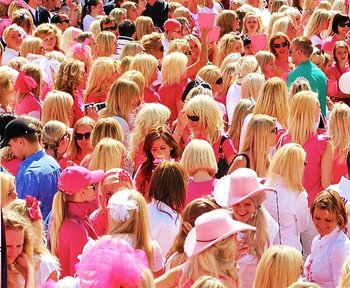 Maybe they all heard gentlemen prefer them.
Hades: Well, you ladies know what new royalty means.
Gothel: More blondes? As if the House of Mouse were lacking blondes.
— ''A Beautiful Stranger

Where characters with fair hair can be seen more frequently than expected for what should be a melting pot population. Specifically, you can see a disproportionate number of blondes for the setting when a show has no fewer than half of the female white cast being blonde. It can include the whole white cast — and sometimes more than that, too. Similar to Blonde, Brunette, Redhead, but on the other end of the scale. The thing is that film casters believe the audience finds blond hair to be beautiful, so if you want to be a movie star, it helps to look good with fair hair. It doesn't help that natural blonde tends to be darker with streaks of brown; even when blonde hair is naturally light, it's more pale and silvery or reddish. Meanwhile, these ladies will have heads full of golden yellow hair that clearly came out of a bottle. This situation can be perfectly justifiable - a family drama where most family members have blonde hair - but usually is not.

Any combination of the sweet, malicious, or dumb blondes becomes Plenty of Blondes because you can't contrast something with itself. Each can be Everyone Loves Blondes. Compare Monochrome Casting if it's one race in what should be a melting pot population, and Phenotype Stereotype when non-white media believes this is true of white people. This may be justified if some of them explicitly dye their hair. May or may not be involved in Mukokuseki works.