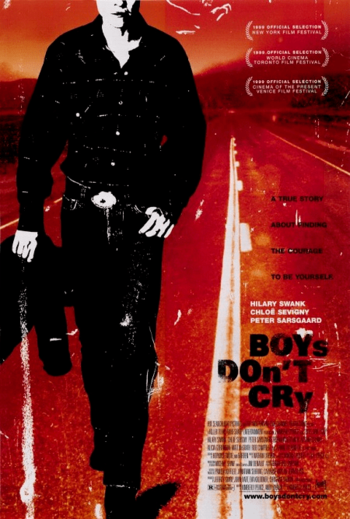 Directed by Kimberly Peirce and released in 1999, Boys Don't Cry is the story of the life and death of a young trans man named Brandon Teena (Hilary Swank). His legal name was Teena Brandon, but that was unknown to the gang of bigoted rednecks he joined.
Advertisement:

They accepted him as one of the guys, and he even started dating the sister of one of these new friends. Of course, when they "discovered" that he was "female", they considered him to be a lesbian. Transphobic hate crimes ensued.

Not to be confused with Men Don't Cry or Boys Who Cry, the boy band from SpongeBob SquarePants.