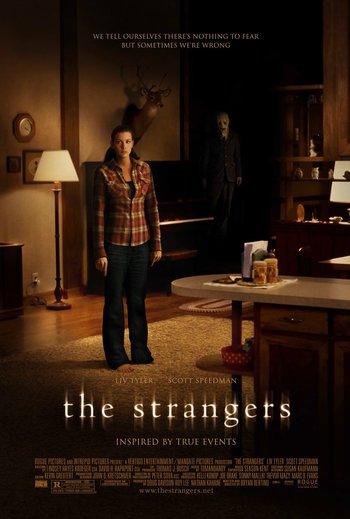 The Strangers is a 2008 horror film written and directed by Bryan Bertino in his directorial debut and starring Liv Tyler, Scott Speedman, and Glenn Howerton.

Kristen McKay (Tyler) and James Hoyt (Speedman) arrive at James' family's vacation house in a secluded area away from civilization. Tension and dissatisfaction plague their relationship, as they've returned from a friend's wedding where Kristen rejected James' marriage proposal at the reception.

However, that soon becomes the least of their problems as — just after 4 AM — they start being terrorized by three masked assailants (the titular "strangers") and enter a violent, desperate struggle to make it to the morning with their lives.

A sequel, titled The Strangers: Prey at Night, was released March 9, 2018.