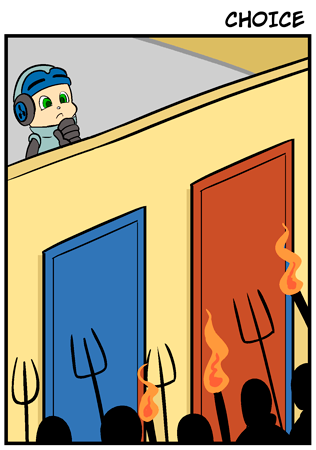 A character is presented with two or more options. Either choice results in the same, or similar, unfortunate consequence. The Many Questions Fallacy is often a form of this, where a loaded question ("Yes or no, have you stopped beating your wife lately?") precludes a "safe" answernote unless you're one of the people who use the word "mu" to mean "this question can only be answered in a way that conflicts with reality" (since, in this case, by denying to answer the question, you are essentially admitting that suspicions about you beating your wife are legitimate).note You could be tricky and say "No, I can't stop if I never started.", but if they're willing to attack you with loaded questions, they're more than willing to Quote Mine you and pretend you said "No, I can't stop...".

The name comes from the tax-collecting practices of John Morton, Archbishop of Canterbury and Lord Chancellor under King Henry VII of England. He reasoned that anyone who was living extravagantly was rich, and so could afford high taxes, whereas anyone who was living frugally had saved a lot, and so could afford high taxes. Bear in mind before you get too crazy that this was typically used to keep people known to be well-off from trying to weasel their way out of paying; he wasn't exactly trying to collect from peasants in hovels. Instead, he was trying to get around a then-common excuse for not paying taxes (that is, not having any money to do so) by discounting the proofs used to support the excuse (actual profligacy and feigned poverty).note The basic rule lives on: if you're going to say that you don't have the money to pay your taxes, you'll have to open your books to the government — simply saying "I spent it all on junk" or "Look, I'm living on the cheap, clearly I'm poor" won't cut it. Sometimes the tax authorities will settle, but more often they'll just put a lien on what you do have so that if you sell anything, they can collect the proceeds. This is a lot easier today, what with electronic payment systems being common; obviously, it was much harder in Morton's day.

This is often confused with Hobson's choice

. Thomas Hobson—who lived about half a century after Morton—leased horses, and, having noticed that, given a real choice, his customers tended to pick the same horses over and over again, leaving them seriously over-used while leaving others almost completely unexercised, he had customers automatically assigned the one nearest the door rather than let them pick, so all the horses would be used and exercised equally. The customer's choice was "Take it (the horse assigned) or leave it (don't get any horse)." A Hobson's choice is a false choice because there's only one real option if you're in need of the thing being offered. A Morton's Fork is a false choice because both options have the same or equally undesirable results.

Compare Xanatos Gambit, where this is weaponized in a specific type of plan and often used by The Chessmaster. See also Sadistic Choice, which similarly forces characters to choose between two untenable choices, except that each leads to a different undesirable outcome. Characters often attempt to Take a Third Option in response, with varying degrees of success. They may instead pick one to Get It Over With. If the fork is deliberately placed into a test, this is Unwinnable Training Simulation. Can be the outcome of a Trial by Ordeal, especially those involving witchcraft, where some ordeals were made to be deadly for innocents, the survivors, being deemed culprits and ending burnt on the stake.

Contrast Sweet and Sour Grapes, wherein a good outcome occurs regardless of the choice made. But Thou Must! is related, because in that case, all the choices are the same, and lead to the same outcome. Not interchangeable with Catch-22 Dilemma, where the problem is circular—to achieve one thing you must first do or acquire something else, but to do or acquire that you must have the first thing.

Remember, it's only a Morton's Fork if both choices lead to basically the same outcome. It isn't enough just to be given a choice between two bad options. If you're offered a choice between a bad option and a worse one, that's probably The Easy Way or the Hard Way. If the choice is deceptive—and the option that seems less bad is actually worse—that's The Window or the Stairs. Subtrope of Failure Is the Only Option. Compare Prisoner's Dilemma.