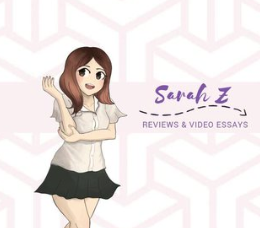 Did you ever hear the tragedy of J K Rowling the billionaire?

"I was driven to start making videos by the same force that has driven me to do everything that I do in life:
Bitterness.
I watched the first episode of Paramount Heathers and it was just... so bad, and I really like Heathers, so I had a lot of things to say about it..."
— "Announcement and Q&A"

(pronounced "Sarah Zed", not "Sarah Zee") is a Canadian video essayist. From back in May 2018, she started out covering topics like films and television before later focusing more on social and artistic issues, such as the concept of authorial intent, "fast-food twitter", Tumblr history, and other aspects of Internet culture. Sarah uses she/they pronouns.

They have been compared to other so-called "BreadTube

Sarah is also part of the cast of the Dungeons & Dragons Actual Play podcast Trials & Trebuchets, where she plays the half-elf bard Mira Marchand.