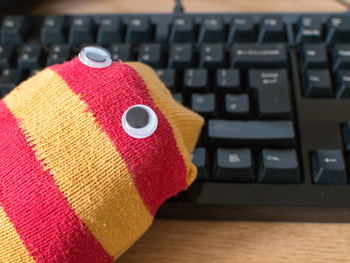 A secondary, pseudonymous Net identity created by an individual in order to give the impression that there are multiple people who agree with a given point, idea, or action, when in reality there's only one. Sock puppets are usually used to post follow-ups that praise their owner or echo their convictions, in the hopes that they will convince real people to pay attention to them and/or their agenda. Alternatively, they can be used to argue against the poster's real agenda, but in such a stupid or offensive manner as to discredit the opposition. Sometimes, they are used to evade bans. While the first Sock Puppets appeared on Usenet (i.e. they are pretty much as old as discussion on the Internet itself), they have long since spread to other electronic venues, most notably blogs.

Sock puppeteers are not limited to individuals, though. Numerous groups — political, commercial, and religious — have attempted to manipulate public opinion on the Net using false identities that purported to be "real" people. And multiple Sock Puppets are a necessary part of any AstroTurf campaign. Fortunately, they tend to be fairly heavy-handed and reasonably obvious to most people.

The term is a long-standing one in electronic media, dating back to the early days of the Net in the 1980s. It originated on Usenet and is still seen there, especially in the anti-spam groups. The term itself comes from the practice of creating a cheap puppet by pulling a sock over your hand, and then pretending to talk to it. One sub-category of the sock puppet is the "concern troll"

, in which a sock puppet pretends to be part of a faction but makes "concerned" derogatory comparisons to another faction for whom the troll is a sock puppet.

This is one of the more popular "Internet Argument Techniques"

◊ very common in forums and mainly used by trolls; this can be a source of frustration to users trying to have an honest debate. Can also be a source of laughs, not only for the trolls and others in on the ruse, but for other users following the argument. Once discovered, this is commonly used as another point against the user and/or another way to discredit their arguments.note Of course, someone could always create fairly obvious sock puppets claiming to agree with the opposition for this very purpose, if they were a particularly Magnificent Bastard.

Sock puppets are banned in many online venues. Wikipedia is notoriously plagued with them; its "anyone can edit" philosophy makes it hard to keep them out, while its bureaucratic processes provide incentives for their creation.

Ad Hominem can occur if someone on the internet accuses another of being a sock puppet when the accused is actually providing an honest opinion of dissent and asking an honest question about accountability and credibility. This might be done by either trolls or as an example of Fan Dumb or Hate Dumb to not have to answer to a criticism or dissenting opinion while still discrediting the person that dissented.

See also AstroTurf and the second definition of Meat Puppet. Not to be confused with an actual Hand Puppet made from a sock. For when you're not sure whether the person is sincere or not, that's Poe's Law.

open/close all folders
Print media
Live-Action TV
Video Games
In the age of online gaming where one has to have an account to play a game, it's not uncommon to find people using these, typically called "alternate" accounts. Please keep all examples in this section to general practices and notable instances.
Web Original