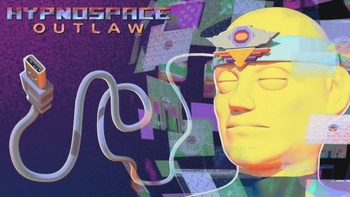 Greetings, Enforcer!
Witness the dawning of a new world, where sleeptime is no longer downtime. It's where the future is built. A future built by you. Hypnospace.
Advertisement:

Hypnospace Outlaw is an internet simulation Adventure Game developed by Jay Tholen & Mike Lasch and published by No More Robots. It was fully funded via Kickstarter in October 2016, and was released in March 2019 on Steam and August 2020 on Nintendo Switch, Playstation 4, and XBox One. August 2020 additionally saw the release of Hypnospace Plus, a free update to the game that adds new pages, music, chances for customization, interactive content and more, which came automatically with console releases.

Welcome to the internet of your dreams — literally! Hypnospace is an online service created by Merchantsoft, from the most advanced technology The '90s have to offer, that allows you to surf the net in your sleep. With the cutting edge Hypnospace Explorer web browser and your trusty HypnOS headband, you can explore a vast variety of websites and user pages for everything from classic cartoons to your favorite flavors of ice cream. Just strap on the headband, lay back, and drift off into a brave new world of the digital era.

Of course, every new form of technology is bound to have growing pains... and Hypnospace is no different. Sites filled with copyright infringing content, harassment and trolling, and sketchy virus-laden programs abound. That is where you come in: as a Merchantsoft-employed Hypnospace Enforcer, it is your duty to police the service for content that violates the rules, remove offending content, and if need be, flag sites for multiple/serious infractions and shut them down entirely. Your diligent efforts will be rewarded with Hypnocoins, the premier (and only!) currency of this brand new online community which can be spent on everything from music and wallpapers to virtual pets. So plug in, doze off, log on, and get to work!

On April 2022, the creators announced

a sequel to Hypnospace Outlaw titled Dreamsettler, which puts you in the shoes of a Sleepnet private detective during an alternate history period of 2003-2005. At the same time, they announced a spin-off game called Slayers X: Terminal Aftermath: Vengance of the Slayer, a Doom-like FPS game created by Zane (one of the characters from Hypnospace Outlaw, now 37 years old) based on ideas from when he was a teenager.

While performing at Coolfest '99, Fre3zer is exposed as a lipsyncer, being one of the reasons for the downfall of the Coolpunk genre

While performing at Coolfest '99, Fre3zer is exposed as a lipsyncer, being one of the reasons for the downfall of the Coolpunk genre