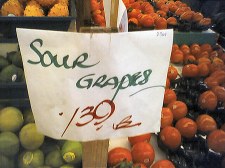 "When they realized they were in the desert, they built a religion to worship thirstiness."
— Saturday Morning Breakfast Cereal
Advertisement:

Sour Grapes Tropes are tropes that exist to convince the viewer that not only is it unlikely that their dreams and fantasies will come true, but it's probably better if they don't. This is done by showing how a character is made miserable when getting their wishes fulfilled.

Stories that don't do this are Wish-Fulfillment fantasies, not that there's anything wrong with that. Fiction has been providing wish fulfillment for centuries. Contemporary fiction, though, often comes off as somehow obliged to show the downside of a desire. Not doing so might be seen as "juvenile." Ironically, Sour Grapes Tropes tend to indulge in their own backhanded brand of Wish-Fulfillment; these tropes are often used to assuage an audience's discomfort and envy seeing a more ambitious or intelligent or lucky character at succeeding in a way that the viewers can't by showing the 'bad' side of their success. See Nietzsche's remarks on ''slave morality'' for the intellectual impulse behind many of the usages of these tropes.

." In the story, a hungry fox tries and fails to reach some grapes that grow high above him from the grapevine, growing increasingly frustrated until he gives up. As he leaves, the fox convinces himself that the grapes were sour (meaning unripe) all along and thus not worth his time, even though he had no way of knowing if the grapes were truly sour, in an attempt to relieve his own frustration and make himself feel better. This is where the term "sour grapes" comes from, which is used to refer to the attitude of disparaging something purely because one cannot have it themselves. Said attitude is what underlies many of the tropes listed below, as they all involve fantastic, desirable situations or traits that both the creator and audience have no way of experiencing for themselves.