Comic Book / Children of the Atom

Spoilers for the first issue twist have been left unmarked. You Have Been Warned. 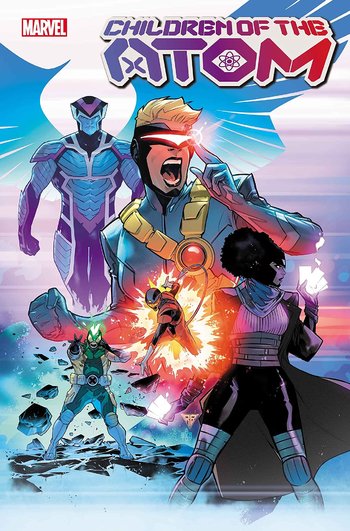 The strangest teens of all!note Left to right: Cherub, Cyclops-Lass, Marvel Guy, Daycrawler, and Gimmick.
Since I can remember, I've always felt different. For a long time, I couldn't figure out why. The one day I turned on the TV, and I saw them. Mutants. The X-Men. And then, suddenly, I knew.
— Beatrice "Buddy" Bartholomew, Children of the Atom #1
Advertisement:

Children of the Atom is a 2021note Was originally supposed to come out in 2020 but was delayed due to the COVID-19 pandemic. Marvel ongoing series, part of the Reign of X line. It is written by Vita Ayala and illustrated by Bernard Chang.

A new team of mutants have shown up in New York to fight crime and help people, but these young teenagers have deliberately modeled themselves after the X-Men: there's Cyclops-Lass (based on Cyclops), Marvel Guy (based on Jean Grey), Cherub (based on Archangel), Daycrawler (based on Nightcrawler), and Gimmick (based on Gambit).

But these mutants don't live on Krakoa... and one day, after taking down a group of criminal former mutants, they end up meeting some real X-Men and, while ecstatic, are also evasive. Because, while it turns out that these teenagers have powers and hero-worship the X-Men, the Krakoan gates don't work for them.

The strangest teens of all might not be mutants after all.

The series ended after 6 issues.

Tropes in Children of the Atom: