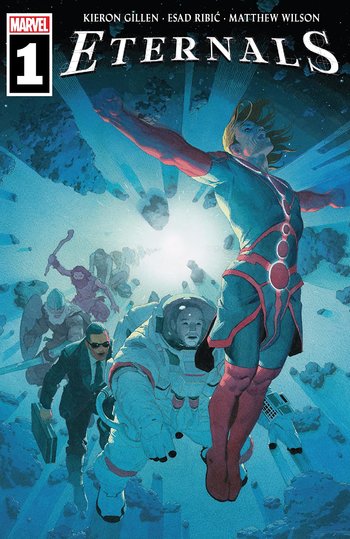 Eternals is a 2021 series by Marvel Comics, created by Kieron Gillen, Esad Ribic, and Matthew Wilson. It is a soft reboot of Jack Kirby's The Eternals.

Millions of years ago, a group of alien space gods called the Celestials came to Earth to do some experiments. They ended up creating one hundred godlike beings known as the Eternals, but also one hundred mutated, grotesque beings called Deviants. Then the Celestials left, charging the Eternals to protect "the Machine," i.e. Earth.

Many years later, the Eternals learned that the Celestials didn't really give a damn about the Earth or them and the Eternals all died in a madness-induced frenzy.

But they are Eternal, so they cannot really die. The Machine has now brought them all back to life (some in different forms) and they continue to live by the same principles as before. But should they?

After all these years, the Eternals might be faced with something completely new: change.

The series is accompanied by one-off specials by different art teams (not part of the main series numbering), either published mid-arc or between arcs:

Not to be confused with the Eternals film, based on the characters, which was also released in 2021.