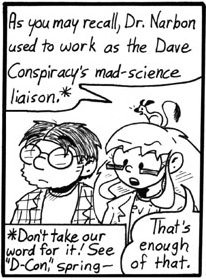 Helen has enough clues as it is.
Advertisement:

Comics trope for any long-running serialized story with an intact continuity. An event mentioned in dialog or captions has an asterisk next to it, and down near the panel border is a little message, saying something like, "See Volume 4, Issue 3 - Ed." Sometimes, in shared universe titles, it may be an issue of a completely different comic series.

Some comics fans, especially young ones, may wonder who this Ed, the enormously helpful man at the comics company, must be. Of course, most of the older fans figure out that this is in fact "the editor". This little footnote also entices the reader to seek out the back issue that includes the story in question. Or, if they don't have the issue, it's an incentive to go out and buy it.

Back in the Silver Age, many of these footnotes in Marvel Comics would be credited to a "(Adjective that begins with 'S') Stan". This was, of course, a reference to Stan Lee.

Use of these notes has been dissuaded by companies today (and they are allegedly all but banned at Marvel to "hide" the Continuity Snarls), but they are starting to make a comeback.

Can also be used for a joke in an article, in which case it's Note From Ed. If you're reading a webcomic, the Alt Text may double as this.