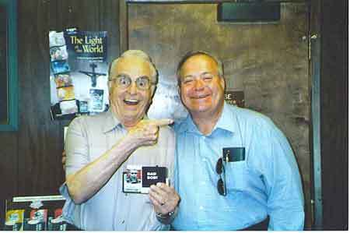 Chick Tracts are short, evangelical comic books that primarily exist in the form of very small printed albums - small enough to easily fit into a wallet. However, most of the tracts are also available for free at the Chick Publications website: Chick.com.

The writing and the majority of the illustrations for the tracts were credited to Jack Chick. Chick was the epitome of a Reclusive Artist, turning down countless interview requests and refusing to allow his photo to be published. This led to major speculation over whether the name was a pseudonym, or even if Chick was a fictional persona.

Each tract tells a story. These stories handle all kinds of subjects, but they all have two things in common: They all have some direct or indirect connection to religion, and they all end in An Aesop about everyone needing to become a born-again Christian. Sometimes the entire story organically builds up to this Aesop; at other times, it can be more or less shoehorned in after the actual story is finished.

Villains in these stories are demons or misguided mortals. Demons range from Cthulhuish monstrosities that make the heroes facing them come across as epic fantasy heroes, to silly little imps that are mostly Played for Laughs. Mortal villains are very likely to make a Heel–Faith Turn due to Easy Evangelism. Those who do not convert invariably end up in Hell and so does everyone else, including those who are kind and selfless. Only a very particular kind of evangelical Christian gets to avoid eternal torture; everyone else is doomed no matter what. Most of the tracts appear to be set in the same world, though some take place in more obviously fantastic near-future dystopias. The baseline setting is Like Reality Unless Otherwise Noted, but even so soon becomes a world very different from Real Life and what most people, including most Christians, are used to. Such is The 'Verse of Chick Tracts:

In other words, this setting is a Dark Fantasy comparable to Warhammer and Warhammer 40,000, although with less graphic violence (and with a bit of South Park thrown in). There are even a few recurring characters, like pencil-'stached Bible-thumper Bob Williams, and innocent, pigtailed schoolgirl Li'l Susy Barnes, who exist to deliver Easy Evangelism and present Chick's message in the most Anvilicious way possible. There's also an Ugly Cute dog (?) named Fang who shows up randomly, and has become the Ensemble Dark Horse of the series.

Unlike Games Workshop, however, the people behind chick.com seem to believe their own message. Some people insist that it must be some kind of parody, however information released after Chick's death makes this unlikely. In a rare interview, Chick stated he was completely serious. Honest or not, he did seem to make a lot of money from people who buy large quantities of his tracts with their own money and then hand them out free of charge to friends and random strangers in the hope that this act will eventually spare a few souls from the horrors of hell.

Meanwhile, and perhaps unsurprisingly, Chick's efforts inspired many parodies, and he was featured as the subject of the documentary, God's Cartoonist.

In addition, a live-action version of "Dark Dungeons" came out in August 2014. It's precisely as over-the-top and narmy as was expected. Also, two other Chick tracts, "The Sissy"

have been made into short animated films. Interestingly enough, the latter has Jack Chick credited as a few supporting roles, meaning it contains one of the few publicly available recordings of Chick's voice.

Chick Publications announced that on October 23, 2016, Jack died at the age of 92. They also began releasing more details about his life, confirming that he was indeed a real person, who grew up in Southern California, briefly pursued an acting career, served in the military, and became a born-again Christian after listening to a radio preacher. Chick's longtime assistant David W. Daniels has taken over the creation of the tracts. In 2017, Daniels published You Don't Know Jack: The Authorized Biography of Christian Cartoonist Jack T. Chick, which was really more of a personal reminiscence (and defense) of Chick than a straight biography, but notably featured several previously-unpublished photos of the man himself.