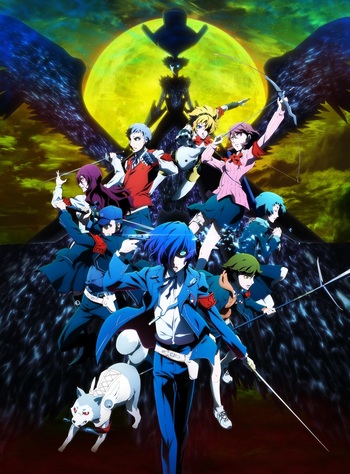 Destiny's in our hands.
Advertisement:

Persona 3: The Movie is a movie tetralogy based off of Persona 3, a spinoff of the Shin Megami Tensei series. All four movies were first released in theaters before later being released on Blu-Ray.

Ordinary High-School Student Makoto Yuki has moved into a new city, the same one where he experienced an accident that killed his parents ten years ago. He discovers on arrival that the town experiences a phenomenon every night at midnight called The Dark Hour, which causes normal time to stop and transforms ordinary people into coffins. Those who aren't transformed are attacked by creatures called Shadows, which will prey on their minds and inflict them with an illness called Apathy Syndrome. Makoto quickly finds out that he has the potential to fight these shadows, using a power known as "Persona". He joins a group of other Persona users who call themselves "S.E.E.S." to help fight these shadows and protect those around him from being attacked.

The first film was animated by AIC ASTA, who animated the TV adaptation of Persona 4, while the remaining three were all animated by A-1 Pictures, who co-animated the original Persona 4 anime cutscenes and animated Persona 4 Golden: The Animation. The films are:

In addition to those on the main page, these movies provide examples of: