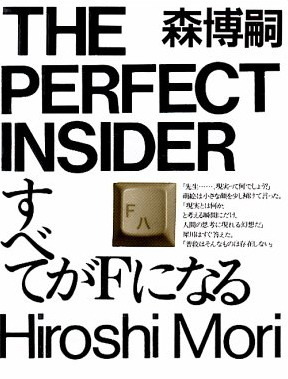 Nishinosono: Doctor, will I be able to see you again?
Magata: If I don't lose an interest in you... when everything becomes F.
Advertisement:

Subete ga F ni Naru: The Perfect Insider (Everything Becomes F: The Perfect Insider) is a mystery novel with hard science fiction elements by MORI Hiroshi. Since its initial publishing in 1996, it has since received critical acclaim won a multitude of awards and has been graced with numerous adaptations, including a J-drama in 2014 and an anime adaptation a year after by A-1 Pictures.

The plot deals with Sōhei Saikawa, a member of the Saikawa Research Lab. He goes on a vacation held by the lab, and Moe Nishinosono, the daughter of his mentor, joins the group on their vacation despite not being a part of the lab. There, the two end up finding a corpse. The two work together to solve the mysteries of what becomes a serial murder case.