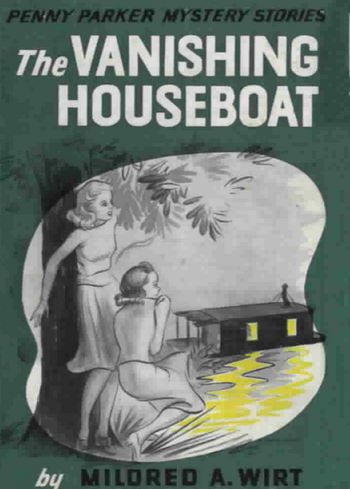 The Penny Parker series was a collection of seventeen books written by Mildred Wirt Benson between 1939 and 1947 (two books a year except for 1945, which only had one). The heroine was the eponymous Penny Parker, a slim, blonde young woman, an only child with a dead mother who was raised by her father and the housekeeper, who was like family. She solved mysteries, most of which took place in her hometown, Riverview, but sometimes were in other locales. Her friends assisted her on her cases and she usually made new ones along the way. Does this sound familiar?
Advertisement:

There were some marked differences from Nancy Drew, however. Penny's father, Anthony Parker, owned and printed The Riverview Star, a newspaper, unlike Carson Drew, who was a lawyer. Penny's character is actually more similar to that of the original Nancy Drew, as she is terribly flippant and impulsive, which tends to get her into hot water. Penny (who, unlike Nancy, is still in school) also has only one close girlfriend her age, Louise Sidell, as opposed to Nancy's Bess and George. Her other friends included Salt Sommers and Jerry Livingston, a photographer and reporter on her father's paper. The latter was more of a Love Interest. The cast was rounded out by Mr. Dewitt (later spelled DeWitt), the Star's gruff city editor.

This was Wirt Benson's favorite of her series, and she is quoted as saying that she thought Penny was "a better Nancy Drew than Nancy was."