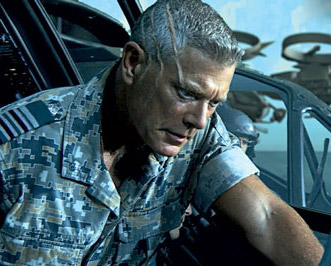 "God will not look you over for medals, degrees or diplomas, but for scars."
— Elbert Hubbard
Advertisement:

A relatively simple way for a writer to show a character is tough, without explicitly saying it: give them a prominent scar. Even if the cause of the scar is never revealed, it's clear that the character suffered some sort of serious wound and survived. For example, you look at a group of Space Marines. Who do you think is the toughest one there: the clean-faced guy or the guy with a healed gash across his face?

Like an Eyepatch After Time Skip, it's a common tool to show a character is a Future Badass.

Compare Every Scar Has a Story and Scar Survey. In this case, the story behind the scar is irrelevant, all that matters is that the character's scar sets them apart as tough or a survivor. Overlap between the two is possible; even if the cause of a scar is revealed, if it is used to show someone is tough then this applies as well. Covered with Scars is a subtrope that occurs when this is taken Up to Eleven. Goes hand-in-hand with Real Men Get Shot and Dented Iron.