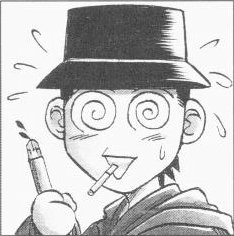 Watsuki, as depicted by himself.
Advertisement:

Nobuhiro Watsuki (born May 26, 1970) is a mangaka who is far and away most famous for being the brain behind Rurouni Kenshin, one of the most successful manga and anime series of the 90s. He's worked on several other titles, however, including Buso Renkin, Gun Blaze West, and was, prior to a certain incident (below), splitting work between his newest work Embalming and some revival material for Kenshin.

Watsuki is notable for several reasons, the first of which is his seeming mastery of Multiple Demographic Appeal (which was most obvious and successful in Kenshin, but applies to all his works). Despite being a Shōnen mangaka (and in fact one of Shonen Jump's steadiest contributors over the years), he deliberately attempts to place elements in his stories - or write entire stories flat out - that will appeal to other age and gender groups. While this doesn't always work, with Kenshin it created one of the anime juggernauts of the 90s, as the crossover appeal of the characters and story is what propelled it to national and international fame. For his part, Watsuki attributes this to having read a decent amount of Shōjo as a lad, and realizing that "boys" and "girls" stories weren't necessarily all that different. This lesson seems to have rubbed off well on his students, too (see directly below).

The second thing he's famous for is something he isn't... directly involved in at all. Watsuki served as the teacher for a certain aspiring mangaka named Eiichiro Oda, and helped that young man solidify his art style and work ethic. Oda went on to create a little manga that you may, potentially, have heard of. If Oda is the God of Shonen, then Watsuki may have to be called the Father-God of Shonen, as it's quite possible that Oda wouldn't have been able to get into the position he did to publish One Piece - or pick up the skills necessary to make it as good as it is - without first working for and learning from Watsuki.

Watsuki had a similar effect on Hiroyuki Takei of Shaman King fame; Watsuki, Oda and Takei are said to maintain a close friendship to this very day.

The final thing he's being famous for is being a bit of a history nut (despite saying that creating historical manga is rather difficult). While he's never let historical fact get completely in the way of a good story, he often does get many of the basic facts very, very right and many of his characters are based off of historical figures (Kenshin himself is based loosely on Kawakami Gensai, and Saito Hajime was lifted from history books almost wholesale). He's especially fond of the 19th century and the trappings therein, and has set most of his major works in that period.

While he was one of the true heavyweights of The '90s, he was somewhat overshadowed by his own students in the new millenium (although almost everyone stood in Oda's shadow once One Piece got popular, to some degree). Buso Renkin was decently well-received, but Gun Blaze West did rather poorly. Embalming made a strong showing, however, and would've likely gotten an anime adaptation in the not-too-distant future, but...

On November 21, 2017, Watsuki was arrested and charged for possession of child pornography

, shocking many fans when this was revealed a month later. Putting the ''Kenshin'' revival on hiatus

for several months, eventually returning in June of 2018

. note  Japan used to have among the most liberal child pornography possesion laws, permitting possesion until 2013; it's possible Watsuki acquired the now-seized footage before the ban was instituted. Either way, this had an impact on his foreign fanbase: Viz Media Cut Short the translation of the Hokkaido arc (causing it to become a case of No Export for You after the restart) of Rurouni Kenshin, and many fans who disagreed with his perception of the issue dumped a lot of his manga.