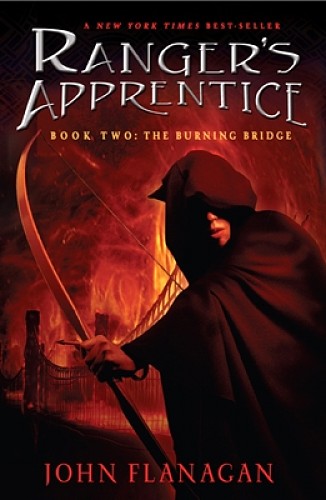 In a medieval Europe much like ours but with all of the names changed, the young orphan Will becomes apprenticed to the elite Ranger Corps of England Araluen after being rejected by the knights' Battleschool due to his small stature. Rangers, their work shrouded in secrecy and camouflaging cloaks, resemble nothing so much as a cross between Robin Hood and the CIA. Will discovers that being a Ranger is not only as exciting and heroic as being a knight, it is also something he excels at.

Then he learns the Big Bad is about to invade his country, has sent killer animal monsters after his beloved mentor Halt, and would like to kill every single Ranger (and Ranger apprentice) while he's at it. Things go downhill for Will from there.

Rather than just being about battles between good and evil, most of the books have the protagonists use not just martial prowess, but also stealth, cunning, and sometimes diplomacy to defeat their enemies. The author says he began writing the series to demonstrate to his then-small young son that you didn't have to be big and strong to be heroic. Later books have a fair amount of mystery mixed in with the action, and the settings for the adventures range from the icy North to the scorching desert.

John Flanagan has announced that he plans to end the series there. Considering he said the same thing about the tenth book (and the twelfth!), some fans hold onto hope that there will be more. It also produced a Spin-Off, the Brotherband Chronicles.

Beware, spoilers for Books 1-7 are UNMARKED