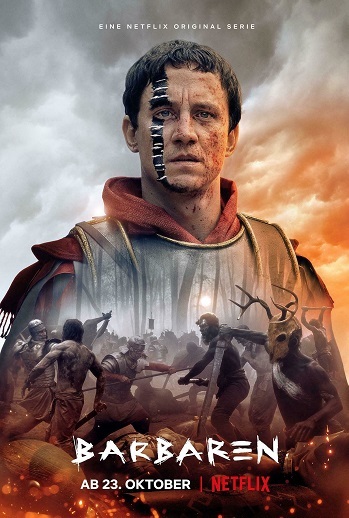 "Torn between the mighty empire that raised him and his own tribal people, a Roman officer's conflicted allegiances lead to an epic historical clash."
Advertisement:

Barbarians (Barbaren) is a 2020 German historical war drama TV series created by Andreas Heckmann and Loosely Based On A True Story. It can be watched on Netflix.

The Roman Empire's rule of the Germanic tribes grows ever more tyrannical, demands for tribute growing and the brutality of the legionaries increasing. But the tribes are fractious and cannot agree on a course of action—they don't even agree they're all Germans. As tensions rise, three young people will decide the fate of Germany: Thusnelda, a headstrong young Cherusci woman; Folkwin, Cherusci warrior and her lover; and Arminius, the long-lost son of the Cherusci chieftain, raised as a Roman. But who is he really loyal to?

The series was renewed for a second season, which came out in 2022.

Tropes in Barbarians include: