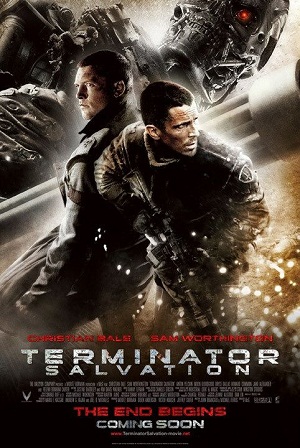 The end begins.
"This is John Connor. If you are hearing this, you are the Resistance."
—John Connor
Advertisement:

Terminator Salvation is the fourth film in the Terminator franchise. It was directed by Joseph McGinty.

The film takes place during the war with the machines and shares no ties to Terminator: The Sarah Connor Chronicles; while it references both Terminator 2: Judgment Day and Terminator 3: Rise of the Machines, it keeps those references vague (the first film holds more importance to Salvation's central themes than the other two films). Salvation is also the only Terminator film so far to forgo the idea of time travel in favor of a post-apocalyptic war slant on the story.

While John Connor has become a highly respected officer within the human resistance movement, he has not yet risen to the role of leader, as several prominent faction leaders question the claims that he will become the savior of mankind. John sets out to end the war as fast as possible (and locate a young Kyle Reese), but his quest reveals an awful truth: the Stable Time Loop has begun to break apart. SkyNet's forces have shown sophistication and progress far ahead of schedule, and numerous other changes Connor never accounted for have thrown humanity's inevitable victory into question. One of these anomalies comes in the form of Marcus Wright, a criminal who reportedly died before the war began, but turned up on his own in the present. Wright's role in the movie works as an inverse of the series' central time-travel mechanic: rather than entering the past from the future, he comes from the past into the future.

There was also a prequel 6-part animated series called Terminator Salvation: The Machinima Series that featured the voice of Moon Bloodgood as Blair Williams set before the events of the film. The series was animated using the character models and settings from the video game tie-in, as well as some additional sequences made using 3D animation software.

The film was followed by Terminator Genisys, which attempted to reboot the franchise.

"There is no fate but what we make."