Parachute in a Tree 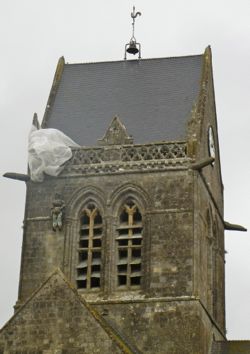 A character ejects or leaps from a plane overhead with a parachute. Before they hit the ground, they pull their parachute and fall slowly to the ground. All is well: soon they'll be safe and sound on the ground.

...If it weren't for that pesky breeze pushing them over towards that cluster of trees. Instead of landing on their feet, the character's parachute snags in the branches and he becomes stuck, dangling helplessly in the air.

If the fall isn't particularly high, the character may try to cut themselves down. Otherwise, they will probably need someone else's help to get down.

This trope covers any situation in which a parachute or similar object snags on something and leaves the owner dangling in the air. It doesn't have to be a tree, it can be a tower, lamppost, cables, or anything else that a parachute could snag on.

This trope is very much Truth in Television both in military parachuting and recreational skydiving, and surviving such a situation is a mandatory part of training. Pilots are equipped with hooked knives for slicing through their parachute cords if this becomes a problem, and some military parachutes have releasable extended lines so that you can reach the ground if you are too high up to get down or risk a fall. In recreational skydiving it is usually better to hang on the harness and wait for help rather than to try to get yourself loose (and risk falling uncontrolled on the ground).