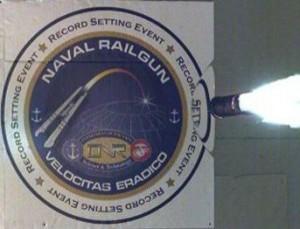 Awesome = ½mv2note For emphasis, that plume of flame behind the slug is not an explosive propellant - it's plasma being formed from the air being ripped apart in its wake. Also, the lensing in front of the slug isn't a camera effect; you are looking through the hypersonic shock cone from behind.
"Slugthrowers. I hate 'em. But they're easy to maintain. Day or two in the jungle and your blaster'll never fire again. A good slug rifle, keep 'em wiped and oiled, they last forever."
— Phloremirlla Tenk, Star Wars
Advertisement:

The story is set in some high-tech and/or futuristic society. There are massive computer networks, sentient robots, and ships that can zip across space with the same amount of effort it takes you to go to the store down the street. Despite all this technology, however, combat isn't all that different. Battle armor may have some gizmos on it, the guns may have higher muzzle velocities and an ammo count greater than the population of several rural communities, war vehicles may be able to do some fancy new tricks, but combat is the same at heart, bullets and shells still rule the battlefield.

If there are energy weapons in the universe, they either are experimental and wracked with issues like overheating and unwanted by-products, or they're horribly disadvantaged with few available shots before a recharge or a new power pack is required. They will often also be the first type of weapon to go wrong; the more complex parts a weapon has the more likely it is to break.

The reason for favouring projectiles in fiction is Rule of Cool — while subjecting stuff to melting or explosive evaporation is cool, broken pieces of the same stuff flying away with a boom may be even better than the mediocre zap of a laser. This does of course have its roots in the fact that Reality Is Unrealistic: serious laser weaponry actually uses short duration pulses with incredibly high energies that would simply explode an object into plasma the same as if it were hit by a high-velocity projectile... but audiences still expect to see Laser Cutters, so we're stuck with them.

For a detailed look into why one may or may not use projectiles over energy weapons, visit our Analysis page.

There are also real world scientific reasons for using projectiles instead of energy weapons, especially against shielded ships. In defending against lasers, the in-universe shields may be extremely effective at re-radiating heat back into space. To stop a projectile, the shield has to decelerate it, and any force applied to the projectile is in turn applied to the shield generator. Mike Wong of Stardestroyer.net

does a good job explaining how the strength of even the strongest shield can come down to how well it's attached to the superstructure of the ship.

Sometimes kinetic weapons themselves don't appear to have advanced, either. Future weapons won't necessarily ''look'' more "advanced" or really be that different from modern ones: whether rounds are fired from a modern rifle or a space railgun, it still functions the same. Precise guides held by a solid external structure are still required to accelerate the projectile downrange to the target.

Compare Rock Beats Laser, Boring, but Practical, Modern Stasis, Break Out the Museum Piece and Video Game Flamethrowers Suck. Usually goes hand in hand with Our Weapons Will Be Boxy in the Future. Contrast We Will Use Lasers in the Future, where energy weapons are more prevalent than kinetic weapons. For cases where certain specific kinetic weapons are preferred, see Revolvers Are Just Better or Shotguns Are Just Better. And if you're looking for the trope taken to its logical extreme, there's Ramming Always Works and the Colony Drop.