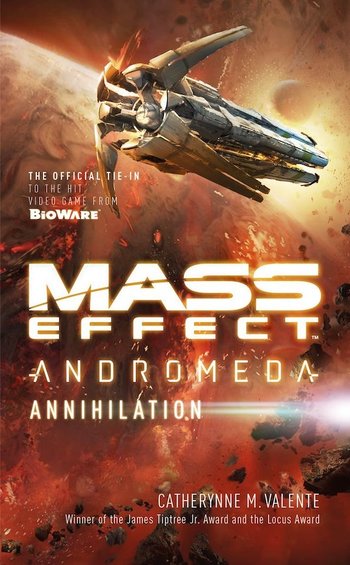 "By the homeworld I hope to find one day"
Advertisement:

Thirty years and hundreds of lightyears before the Nexus and the ark Hyperion would arrive in the Heleus Cluster, disaster had already struck the Initiative.

Aboard the Keelah Si'yah 20,000 souls from across six different species lay asleep in their cryopods, dreaming of a new galaxy and a new life. But the dream is about become a nightmare for the members of the ship's "Sleepwalker" team and potentially all those aboard.

Senna'Nir and the rest of the remaining members of Sleepwalker Team Blue-7 are prematurely awaken by the ship's VI "K". Having detected an abnormity, the VI has pulled them out of stasis to investigate and what the team discovers horrifies them. A deadly pathogen has been set loose aboard the Keelah Si'yah taking the lives of several of the passengers. And worst, the virus has the ability to infect multiple species.

As the Sleepwalkers try to solve the mystery behind the plague, the ship's systems begin to malfunction and it becomes increasingly clear that this was no accident. If any of them hopes to see the new galaxy and find a new home, the members of Blue-7 must hurry to find a cure and save the ship while facing panicked colonists, mad infected, and the possibility the ones responsible for it all may still be on board...