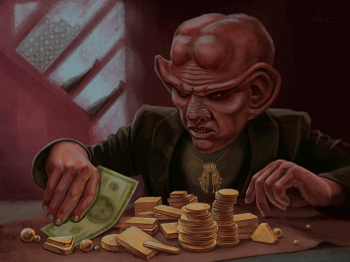 .
Rom: Maybe we are dead. Maybe this is the Divine Treasury.
Quark: Oh, don't be ridiculous. The Divine Treasury is made of pure latinum. Besides, where's the Blessed Exchequer? Where are the Celestial Auctioneers? And why aren't we bidding for our new lives?
Rom: You don't think we're in the other place?
Nog: The Vault of Eternal Destitution?
Quark: Don't be ridiculous. My bar was showing a profit.
—Star Trek: Deep Space Nine

A Proud Merchant Race is one whose hat is being Intrepid Merchants. They may have a system of morality based in commerce and have Folk Heroes that made tremendous profit or opened new avenues of trade. They might raise their children to dominate commodity markets and consider "merchant" as the highest of all professions.

This trope has overlap with Space Jews, but it is often in a positive manner with implications of having a tradition of enterprise and exploration. It's deemed less politically incorrect to depict aliens or fantastic creatures in this fashion than real humans.

Expect there to be any number of Corrupt Corporate Executives who will do anything for a quick buck and there may be an Honest John's Dealership or two in the ranks of them. After all, if making money is all that matters then they are perfectly in line with their planet's hat. On the flip side, expect to find Honest Corporate Executives who sneer at and spit on those who fix scales and break contracts. After all, if a merchant can only make money by cheating then they are no better than that natural enemy of merchants, the thief!

They almost certainly have a Merchant City, perhaps ruled over by Merchant Princes.

This trope may overlap with Intrepid Merchant. One difference is that a Merchant City can be just a place where Intrepid Merchants from elsewhere visit whereas a Proud Merchant Race has to conduct trading on its own. As trading long distances is dangerous and outlaws ever present, sometimes a Proud Merchant Race is a Proud Warrior Race as well, or at least a race whose martial prowess is dangerously underestimated. The logical conclusion of such a combination is War for Fun and Profit.

Despite positive portrayals, a fair deal of Fantastic Racism often shows up, especially in older works, with someone getting shrewdly out-negotiated (read: screwed over) by them or occasionally just outright cheated. Another negative tends to be that non-merchants in their ranks likely suffer Klingon Scientists Get No Respect.