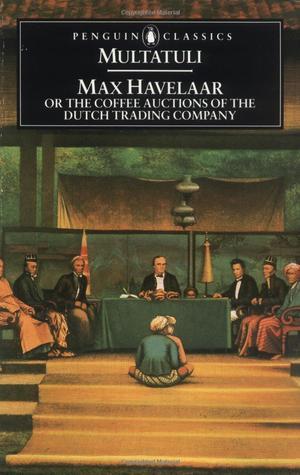 Max Havelaar, of de koffiveilingen der Nederlandsche Handelsmaatschappy ("Max Havelaar, or the coffee auctions of the Dutch Trading Company") is a classic Dutch novel by Eduard Douwes Dekker, under the Pen Name "Multatuli". Originally published in 1860, it is widely known today for two things. The first is its rabid anti-colonialist stance (which is not entirely accurate; see Post-Mortem Conversion below). The second is its complex, confusing structure: it features Anachronic Order, two Shows Within A Show, multiple Author Avatars, a Fourth Wall-breaking Author Filibuster, and a lot of Seinfeldian Conversation, besides playing fast and loose with The Law of Conservation of Detail and the boundaries between fiction and reality.

So what is it about?

The story begins when Batavus Droogstoppel, a wealthy coffee broker from Amsterdam, unexpectedly meets a former classmate of his, whom he has not seen in a long time. The man, to whom Droogstoppel refers as "Sjaalman" ("Shawl Guy") because he's wearing a shawl, appears to be rather poor and not very concerned with practical matters; thus, Droogstoppel considers him highly unpleasant company and tries to get rid of him. Two days later, however, Sjaalman delivers a large pile of his own essays on all manner of subjects to Droogstoppel's house, with a letter requesting that Droogstoppel fund their publication. Initially, Droogstoppel dismisses the idea out of hand, but gradually, he becomes convinced that some of these essays are important to the coffee trade (which is his work, and all he really cares about). He asks his young clerk, Ernest Stern, to write a book about coffee, based on some of Sjaalman's essays.

Stern starts writing, and this is where the real story begins. It takes place in the Dutch East Indies, and revolves around Max Havelaar, the governor of the small district of Lebak on the west coast of Java. Havelaar tries to do something against the injustices the peasants in his district suffer at the hands of the local nobility, but his efforts are thwarted at every step by his superiors. They figure that it's easier to keep the population in check if the local feudal power structure is left intact, and thus will do anything to remain friends with the nobility. As Havelaar grows increasingly frustrated, the tone of the book becomes more and more hysterical. In the meantime, Havelaar has some very Seinfeldian Conversation with his wife and his direct underlings.

This story is interrupted every now and then by a few chapters narrated by Droogstoppel, who disapproves of the direction Stern is taking with the book, and complains about the "corrupting" influence the poetically inclined clerk has on his children. Droogstoppel also uses a lot of Insane Troll Logic to show that the peasants of Java have nothing to complain about.

Cue the second Show Within a Show: Stern recounts the heart-rending story of Saïdjah and Adinda, two Javanese lovers whose lives are frequently torn apart by the cruelly high tribute demanded by the nobility and the Dutch colonial administration, and eventually ended by the savage military campaigns of the latter.

Cut back to Havelaar's story, which reaches a climax as Havelaar prepares to arrest Karta Nata Negara, the most important nobleman in his district, for extortion. Havelaar's underlings and colleagues all refuse to testify against Nata Negara, afraid of being poisoned by his cronies (Havelaar's predecessor, who was likewise investigating Nata Negara's conduct, died under very suspicious circumstances). Havelaar proceeds regardless, and asks his direct superior, Slijmering, for permission to arrest Nata Negara. Slijmering is shocked, and meets with Havelaar in person to talk him out of it. Havelaar will not be moved, however; Slijmering now has to report Havelaar's suspicions of Nata Negara to the Governor-General of the Dutch East Indies, who is none too pleased. The Governor-General fires Havelaar, but offers him a similar position in another district; Havelaar refuses, enraged. He travels to the Governor-General's palace to plead with him in person, but is told, again and again for several weeks, that His Excellence doesn't have time to see him. Eventually, the Governor-General leaves for the Netherlands before Havelaar has had a chance to speak to him.

Multatuli now breaks the Fourth Wall and directly instructs his two narrators to stop, before 'taking up the pen' and launching into a now-famous Author Filibuster about exploitation and poor governance in the Dutch East Indies. He explicitly acknowledges that his book is an Author Tract, and dismisses all criticism of its style, plot, etc. with 'Yes, that may all well be... but THE JAVANESE ARE BEING MISTREATED!'

In case it isn't obvious by now: Multatuli's main goal, in writing Max Havelaar, was to put the suffering of the common man in the Dutch East Indies on the agenda in the Netherlands. Although few people paid attention to this aspect of the book at first, he certainly succeeded in the long run; by 1900, the Dutch government had adopted the "Ethical Policy" which stated that it was the colonial government's duty to support and educate the natives, rather than simply exploit them.

A large Dutch fair-trade company is named "Max Havelaar" after the character. Also, droogstoppel (which translates as "dry-stubble") became a Dutch word for a very boring and strait-laced person. It has now fallen out of use, however.