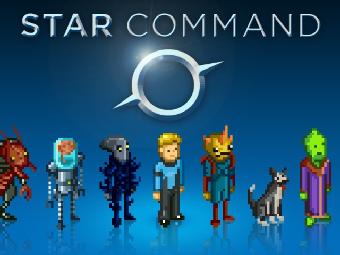 Left-to-right: Antorian, Cortex, Vocar, human (science officer), Trilaxian, canine (not in the game unless you participated in the Kickstarter campaign), Midorian. In case you were wondering, they're all standing in line to the bathroom.
Star Command is a game developed for iOS, Android, and PC/Mac (released later). It's a mix of simulation and RPG with the player assuming command of a starship and managing its functions and various rooms in order to fulfil missions. Originally pitched by the developer War Balloon Games on Kickstarter as a mix between Star Trek and Game Dev Story, the project received double the requested amount and was released in 2013 by 14Bricks. Like Game Dev Story, Star Command employs pixel graphics in a deliberate attempt to re-create the retro feel of old games.
Advertisement:

At the beginning, the player creates his or her avatar and is given several crewmembers to start. The Bridge and engine rooms are already created. The rest of the rooms require tokens to be built. Crewmembers can be divided into three categories: Red (tactical), Yellow (technical), and Blue (science/medical). The types of tokens that can be used to recruit crewmembers and build/upgrade rooms are also of these colors, although any of these tokens can be used to recruit someone. Crewmembers assigned to the bridge, armory, or any of the weapons rooms don red uniforms and are able to fight off boarders with blasters. Yellow crewmembers are those assigned to the engine, dodge generator, and sentry rooms. Those assigned to the medical, shield booster, and healing rooms are blue. The only one who doesn't change uniforms depending on assignment is the Player Character, who is initially assigned to the bridge, but can be assigned anywhere. All crewmembers gain XP when performing their duties: red when fighting or charging weapons; yellow when fixing the ship, building sentry drones, or charging the dodge generator; blue when healing, building resurrection tokens, or charging the shield booster. Crewmemebers who level up get an additional point to their current color score. Each ten points in a category unlocks a new ability, although only one can be active at the same time (e.g. rapid-fire for red or instant heal/fix for blue/yellow).

Much of the game involves combat with another ship (always 1-on-1). The combat interface shows enemy stats such as the state of their armor and shields and the charge level of their weapons and transporters. Unlike the player's ship, enemy shields don't recharge and, instead, act as more armor. When the player's ship's shields are knocked down (usually after a single hit) below a certain threshold, the enemy can beam in boarders who attempt to kill your crew and destroy your rooms. Weapons are usually targeted pretty randomly. A hit on a normal section will usually result in some damage to the ship's health and this area being on fire (which does no harm to anyone). A hit in a room may damage this room and make it unusable (as well as its function) until repaired. A hit on the outer hull is likely to result in Explosive Decompression. Anyone in the vicinity of a hull breach will be sucked out. Unfortunately, the AI doesn't quite grasp that, so both the enemy and your crew will happily walk past an exposed section and will be breathing vacuum before they know it. The only way to avoid being hit by enemy weapons is to use the dodge generator to evade (the ship's animation doesn't show it; both just hang in space and trade blows). Each ship design features two weapons rooms with three possibilities on the type of weapons: laser, plasma torpedo, and machinegun. Different weapons must be chosen for each weapons room. When a weapon is charged, it can be fired, provided the player passes a targeting mini-game, which is different for each weapon. Lasers are medium-level weapons with the fastest recharge rate but only a max of three shots per charge. Plasma torpedoes are the most powerful and can potentially fire four shots per charge. The machinegun can potentially fire up to 30 shots per charge, but each shot is weak.

At the beginning, only a single ship design is available. This one is small and only features small rooms. After beating the game, three medium ship designs are unlocked that feature small and medium rooms. No large designs are available at the moment but may be added in the future.

The storyline starts with the player receiving a ship to command and sent by Admiral Micari of Star Command to travelto Mercury and locate a missing cargo ship. Upon ariving, the player finds its wreck and is immediately attacked by an Antorian scout ship. Next, the Admiral sends the player to Mars to investigate a strange spacecraft that has appeared there, which turns out to be an old Soviet spaceship filled with zombie cosmonauts, who immediately start beaming themselves aboard your ship, ignoring shields. The next mission involves saving a ship of peaceful Midorians from an Antorian dreadnought whose princess offers to join your crew. After that, the player comes upon a destroyed Star Command ship and is accused by Admiral Micari of treason. Barely escaping from being destroyed by his flagship the Olympus, the player flees to the Midorian homeworld of Noorfoo in the Tarsus system (the game calls it a galaxy but it's clearly not). After fighting enemies at every location in Tarsus (and doing one Timed Mission at Deimos back in Sol), the Midorians inform you that Sol is under attack by a large Antorian fleet. The player returns to Sol only to find out that traitorous humans are helping them and are, in fact, led by Admiral Micari. He survives the destruction of the Olympus and flees to Antoria in an Escape Pod. The final battle involves first facing off the most powerful Antorian dreadnought yet and a heavily-upgraded Olympus-class ship under Micari's command, one right after another. The player can then fly to the Phobos shipyards to select a new ship design and replay the campaign at a higher difficulty level (while keeping all the existing crew with their XP).

The game features plenty of Shout Outs to Star Trek, and many of the game's alien races are, in some ways, parodies of races encountered on the show.

An expanded, open-ended version called Star Command Galaxies is currently in the Alpha stage of development for PC and Mac. The game will feature custom ship layouts and a procedurally-generated galaxy.