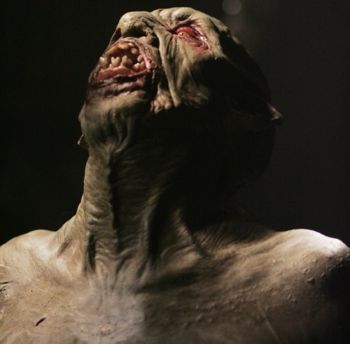 Supernatural's version of a wendigo, who was once human.
Advertisement:

It can be their original form, but they may also be the result of a monster that starts undergoing transformations that make it more human instead of yet more monstrous, or a human transforming into a monster but only going there halfway, or doing so much evil that they gradually become monsters. This trope is not defined by the nature of the creature but by its form.

Expect the more "human" of them to show their true monstrous features at some point. While Lovecraftian Superpowers can act as a qualification, they aren't a requirement, and be careful the example doesn't qualify for Humanoid Abomination instead, as Eldritch Abominations in human form rarely qualify for this trope. See Red Right Hand for examples of monstrous features being used to indicate evilness.

Uncanny Valley is related, but distinct from this trope, as monstrous humanoids, while human-looking, are still recognizably monstrous, while Uncanny Valley creeps people out because the creature looks almost indistinguishable from humans except for the one thing that is "off" about them.

Many mythological beings take this form - as a physical manifestation of intelligence and civilization in the human form and assorted forces of wilderness in the monster, the result being a supernatural Liminal Being. That this form is so common is partly due to Most Writers Are Human, as the monsters become more comprehensible and identifiable as advanced and cunning beings as their anthropomorphism increases, but ceasing it before they become too human and progressing into Uncanny Valley.

More monstrous examples of Vampires may qualify as well. Many Spirits are often depicted this way.

Compare and contrast Humanoid Abomination, where the creature is not a humanoid, but just humanoid.

Other Spink and Forcible

During the Other Mother's game, Coraline is faced with the Other Miss Spink and Other Miss Forcible, having been transformed into a monstrous taffy-thing twisted together.

Other Spink and Forcible

During the Other Mother's game, Coraline is faced with the Other Miss Spink and Other Miss Forcible, having been transformed into a monstrous taffy-thing twisted together.