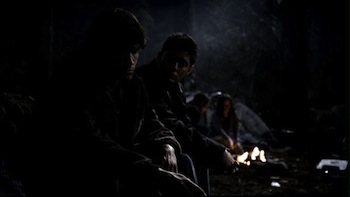 "I think he wants us to pick up where he left off, you know, saving people, hunting things. The family business."—Dean to Sam
Roy: You're rangers?
Dean: That's right.
Haley Collins: And you're hiking out in biker boots and jeans?
Dean: Oh, sweetheart, I don't do shorts.

and end up helping to rescue a lost camper.

Following coordinates left to them by their father, Sam and Dean wind up in the woods in Colorado with a group of hikers as they stumble across a wendigo. Sam is still grieving for Jessica and suffering nightmares. Dean teaches Sam that helping others and saving people can provide some relief for his anger, as they work to save Tommy Collins and get to know his sister and brother in the process. Dean seems very interested in getting to know his sister, Haley Collins. However, they do not find their father, and they realize their father left them the coordinates because he wanted them to continue hunting and not to help them find him. While the wendigo kills the group's forest guide and kidnaps Dean and Haley, they and Tommy are successfully rescued and the wendigo is killed by Dean with a flare gun.

For this episode = 3 humans and 1 wendigo.