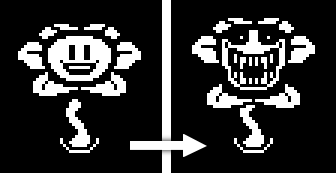 Howdy! Catch my "friendliness pellets"!
Catch *HP to 1* You idiot! In this world, it's kill or be killed!
"I shall enjoy plucking the petals from the wilting flower that is your life! [...] PlantMan! Treacherous Bloom!"
— PlantMan.exe, Mega Man Battle Network 3: White and Blue
Advertisement:

Flowers are well-loved for their colorful petals and wonderful smells. Anthropomorphic smiling flowers are commonly seen in Sugar Bowl worlds. As with things such as circuses or Santa Claus, some creators like to subvert this positive portrayal and make it a downright evil character.

Foul Flowers are commonly portrayed as seemingly cute. Though their green, slender stems might look a little sinister, their smiling faces and vibrant petals may be deceptive, allowing them to commit all sorts of horrible acts. They may have cutesy names to go along with their innocent appearances. They are usually found in a Crapsaccharine World, and may instigate a Sugar Apocalypse if they destroy their happy land. Green Thumb is a common power used by them.

This negative portrayal may stem (no pun intended!) from the fact that a few flowers really do have some negative connotations. For example, Rafflesia arnoldii are known for their corpse-like smell, and Cherry Blossoms are used for connotations of death, due to not lasting very long, which reminds people of their own mortality. Additionally other species of flowers contain poison which can permanently put an end to a hiking trip, especially if they were mistaken for similar looking but harmless variants. To an individual suffering from medical conditions such as allergies or asthma, even the otherwise harmless spores emitted en-masse are the cause of much suffering;

Fictional plants especially seem to be designed to inflict maximum harm. In addition to the popular poison trait, the aforementioned spores may be deliberately weaponized in fiction to infect hosts. Less subtle plants may sport thorns or possessing razor sharp leaves or petals.

It could also be due to attracting various creatures for the sake of pollination, and many said creatures are notorious for their stingers.

Compare Alluring Flowers, Man-Eating Plant, When Trees Attack and Botanical Abomination, other villainous plants which are usually portrayed as more Obviously Evil than a Foul Flower. There may be some overlap, though.