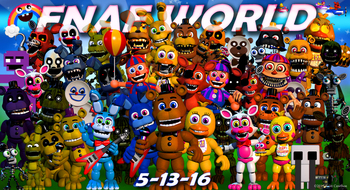 Are you ready for an adventure with Freddy?note This image actually changed daily, but now all the characters that made it into the game are there.
"They've stalked you. They've scared you. They've haunted you. But now... They're CUTE."
"WHAT THE F-"
— Trailer
Advertisement:

by developer Scott Cawthon on September 15, 2015, the image on his website

started changing some of the characters a few days prior.

Unlike its Survival Horror parent, this game is a Lighter and Softer Role-Playing Game, where one can make a party out of the dozens and dozens of animatronics seen throughout the series (though each one has been Super-Deformed into an "Adventure" design). This includes the classic, withered, toy, phantom and nightmare versions. Other characters, such as the paper plate dolls and the Crying Child from 2, can also be acquired as party members.

The game was originally released on January 21st, 2016, but the game was pulled from Steam a few days later due to Scott himself admitting that the game was unfinished and had several problems. Scott later announced

that he'll improve upon the game, including a 3D overworld and move descriptions. The initial launch of the game can be refunded from Steam regardless of how long it has been played (Steam normally won't let you refund unless you've played less than two hours). On February 9th, 2016, the game has been updated and re-released on GameJolt, but it's not available for Steam officially (you can still download it legally if you enter "steam://install/427920" on your browser). The new and improved version can be downloaded here

In late February, the FNaF World site updated again, with a new teaser for update 2 that featured several new characters: Nightmare BB and Nightmarionne, The Jack-o'-Animatronics, Coffee from The Desolate Hope, and, strangely enough, the Purple Guy. Update 2 was released on May 13, 2016, featuring brand-new minigames and voice acting.

On January 17th, 2017, Scott announced that FNaF World will no longer be updated, as the Android port was removed from Google Play and the iOS port is cancelled soon after. The official website

On August 8th, 2019 — two years after the website went dark — the site was updated to contain a 58 in brackets and, once brightened, several negative reviews, heavily indicating a potential third update.