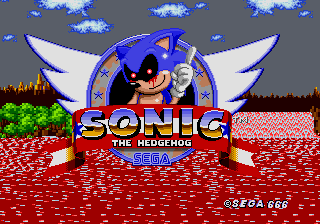 Sonic the Hedgehog, now with 70% more oceans of blood!
Advertisement:

originated as a Creepypasta fanfic by Sir JC the Hyena. Since then, it has been turned into a video game that replicates the experience (sans X actually coming out of the screen) by MY5TCrimson