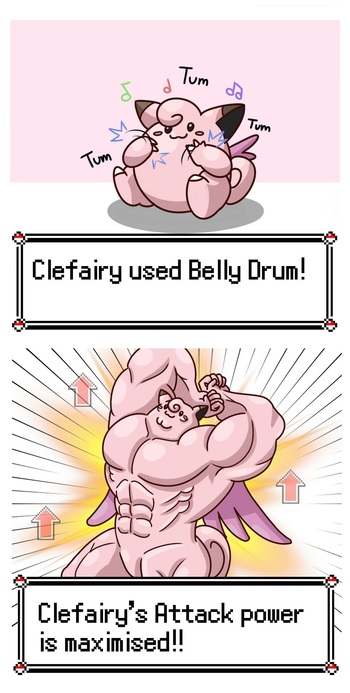 KatalystComics
Before you Describe Status Buff Here, put on your favorite song, to add +2 to troping.
Advertisement:

A Stock RPG Spell, this is an ability that gives a temporary boost of one form or another to a character or an ally. Often called just a "buff". Can be a cast spell, a technological ability, or can be packaged as a single-use item like a potion or drug.

The defining characteristic is that the buff must be temporary. Some must target a specific character for the effect, but more recently "auras", or area-effect constant buffs, have become popular. These apply to all allies inside a range of the caster, with a possible maximum number of total affected. This reduces micromanagement of buffing, but auras most often have a lesser effect than a straight buff spell.

These boosts can overlap with the concept of the Power-Up, in that both make your character stronger. Having said that, Power Ups are more likely to be found in single-player games, and are always stumbled upon in the game world instead of being bestowed upon you by a third party. Similarly, a Field Power Effect is usually due to external and non-human forces affecting the strength of a set of characters.

For the narrative equivalent, please see Magic Enhancement. This is closely related to Meta Power.

Some spell-casting character classes specialize in these enhancements, and they become everyone's friend very quickly when playing in a multiplayer environment, especially when they double as a healer. By the same token, these classes often have trouble looking out for themselves. The characters that specialize in buffs and healing/repairs are often called "support classes", although this classifier is really a superset encompassing any non-combat roles on a team.

Watch out for enemies that can cast a Status-Buff Dispel.

For battles in The Origami King, lining up enemies well increases your attack by 1.5x

For battles in The Origami King, lining up enemies well increases your attack by 1.5x