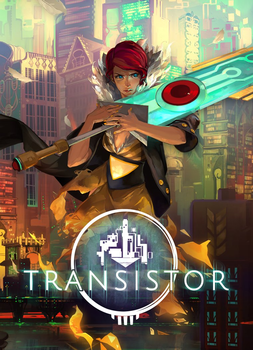 When you speak, I hear silence...

Everybody has a voice in Cloudbank.
Now the city's most influential voices are vanishing one by one.
It is Red's turn.
—Reveal Trailer

Transistor is the Spiritual Successor to Supergiant Games' previous hit Bastion, featuring the returning voice talent of Logan Cunningham as the titular weapon. In the city of Cloudbank, a young singer known as Red is attacked by a mysterious organization known as the Camerata. Somehow, she survives (although she loses her voice) but finds the dead body of a man she knows. Impaled in his stomach is a mysterious sword called the Transistor, and contained within the sword is the soul of the man himself. Red takes the sword, and together they set out to discover the intentions of the Camerata and stop the dangerous force known as the Process from overtaking the city.

Gameplay is a mixture of real-time action comparable to Bastion and tactical RPG-like elements; "Planning Mode", A.K.A. "Turn()", can be used to plan a chain of attacks and move around at high speed when executing the plan. There are a number of Functions (a.k.a. spells) to unlock, each capable of being used as a skill themselves, an upgrade to another Function, or as a passive ability, with a huge variety of available combinations.

See you in the country...