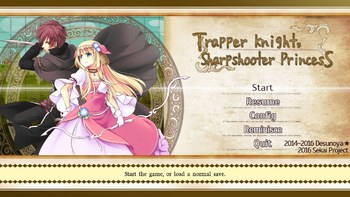 Gritz in the back, Leah in the front
Advertisement:

Trapper Knight, Sharpshooter Princess is a Turn-Based Strategy game developed by desunoya and published by Sekai Project. It was released for PC through Steam on April 10th, 2017. The game is heavily inspired by the Fire Emblem series, particularly in its "Bond" mechanic that allows units that fight close together to rank up their relationship and gain bonuses from proximity on the battlefield.

The story focuses on Gritz, the titular Trapper Knight, who took the skills handed down by his huntsman father to become a mercenary that dreams of making a name for himself. Currently in the small town of Country Ceremo, of the Granfesta Kingdom, he notices a dispute taking place near the local Item shop. A lady named Leah intervenes, and after Gritz decides to help her, she decides to tag along on his adventures to see how well he can fight. After a few missions together, she reveals her true identity to him: Princess Filalia of Granfesta. This Sharpshooter Princess needs help in order to free her father from a Witch's spell, and recruits Gritz to her cause. And so begins their story...