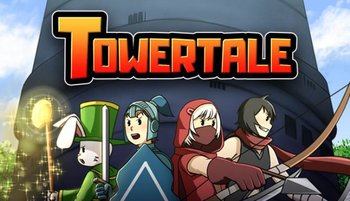 Towertale is a 2D action game focused on boss battles.

The game follows 4 separated character braving through a tower that has a guardian monster in each floor, with the promise that the first person to get to the top of the tower will get the ability to change their own fate.

It is available on Steam

Has nothing to do with TowerFall.