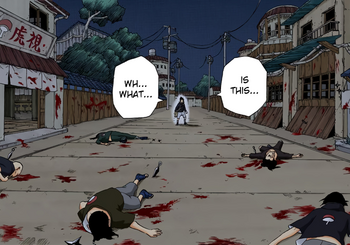 "And I alone am escaped to tell thee."
— Job 1:19 (King James Version)
Advertisement:

It could happen in a lot of ways. Your family picnic is gunned down by The Mafia. Your platoon is ordered to do something suicidal by General Ripper. Your ship goes down. Your Doomed Hometown has a volcano erupt on it. You were Playing Possum when wounded. You were knocked unconscious during the Last Stand. You were the lucky duck who did not find the Applied Phlebotinum lethal. You were sent to Bring News Back. You were ordered to perform some errand, often stunningly trivial, which left you off-base when the surprise attack overwhelmed it. But somehow you alone survive this horrible event. You've become a Sole Survivor.

This is the eventual outcome of a Dwindling Party. It can lead to Survivor Guilt or a Roaring Rampage of Revenge. A Sole Survivor may become a Zen Survivor or Shellshocked Veteran.

Compare Spare a Messenger, Everybody's Dead, Dave, and Final Girl. Contrast any story with an Undead Author. Not to be confused with the summer camp Soul Survivor or the winner of the reality TV show Survivor.