Film / Only the Brave 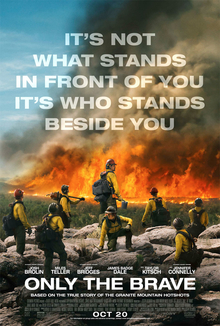 Into the mouth of Hell we march.

Only the Brave is a 2017 Dramatization about the Granite Mountain Hotshots of the Prescott Fire Dept. starring Josh Brolin, Jennifer Connelly, Jeff Bridges and Miles Teller.

In Prescott, AZ, Eric Marsh is trying to get a municipal (town-based rather then agency-based) crew of wildland firefighters certified as a Type 1, or interagency "Hot Shot", crew. To do this requires a grueling training regimen followed by certification by a federal official, which is done on the front line against a real fire.

After receiving their certification (after quite a few bumps in the road) they go on to successfully battle several fires, culminating in a fire not far from home in Yarnell, AZ that suddenly takes a deadly turn and puts their skills to the ultimate test.