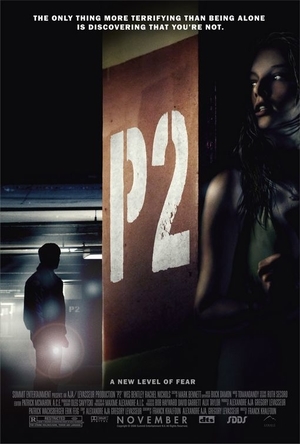 P2 is a 2007 horror film directed by Franck Khalfoun, written by Alexandre Aja, and starring Rachel Nichols and Wes Bentley.

Angela is a young businesswoman stuck working late at the office on Christmas Eve. When she finally decides to head home to a family Christmas gathering, she unfortunately finds that her car won't start, even after help from Thomas, the only security guard left on duty. Thomas, who will be stuck in the building over the three-day Christmas break, invites Angela to have Christmas dinner with him; to his chagrin, she rejects his offer. With no other choice left, Angela calls a taxi, but when it arrives, she realizes the doors to the lobby are locked. Angela heads back down to the parking garage to find Thomas so that he may open the doors for her. However, once she reaches P2, the lights begin to shut off, allowing Thomas to sneak up on Angela and knock her out cold with chloroform. When Angela wakes up, she finds herself chained to a table and forced into accepting Thomas's dinner invitation.