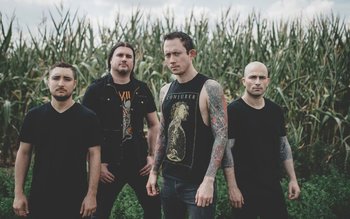 Trivium are a Sub-Genre Busting Metal band originating from Florida. Considering where they come from, however, they have surprisingly little Death Metal influence.

Lead vocalist/rhythm guitarist and main songwriter Matt Heafy (arguably the Face of the Band) joined in 1999, after impressing then vocalist Brad Lewter with a cover of the Offspring's "Self Esteem" at a high school talent show. The name Trivium had been decided before he arrived. No one in the band really knows its meaning (other than the literal Trivium of Studies) but they've kept it due to Rule of Cool, and Matt later went on record to say that it was something of an allusion to their mix of thrash metal, melodic death metal, and pop-punk.note "Trivium" means something like "crossroad" or "intersection" in Latin.

The band debuted in 2003 with Ember to Inferno (a weird early installment), recorded when Heafy was only 17 years old (as mentioned, it shows). The album received little mainstream attention, but it somehow got to Roadrunner, who signed the band, and they got cracking on a second album.

The band's second album, Ascendancy, was a major success and was well received by fans, refining and focusing their sound into what was described at the time as a mix of old-school thrash aggression with Metalcore screaming, breakdowns, and Drop-D guitar tuning. It is arguably the beginning of their trend of every album being a New Sound Album; this was solidified with 2006's The Crusade, which almost completely abandoned Metalcore and focused everything on the thrash elements and only previously hinted at Proto-Progressive approach, as well as introducing the use of 7-string guitars, ditching Drop-D and screaming almost entirely in favor of an approach that critics and fans described as either "inspired" by Metallica, or "plagiarised" from Metallica (many of the Broken Base fans who broke off), especially since Matt Heafy sounds quite Hetfield-esque when singing. Critical reception was overall positive, but the album caused a Broken Base, typically along the lines of They Changed It, Now It Sucks! vs. Growing the Beard, especially for Metal fans who still haven't gotten into screaming vocals.

While it can still be considered a New Sound Album in its own right, it's best to imagine 2008's Shogun as taking everything from The Crusade and cranking it up to eleven. (Considering what could be said to be the simplicity of concept in Ascendancy then Serial Escalation). The songs were longer, faster, and more technical, all of which could be said about the guitar solos as well; screaming was re-incorporated; the 7-strings were used on at least half of the songs; and even the 8-minute instrumental album closer "The Crusade" from the previous album was taken to its logical extreme on Shogun with its title track, an 11-minute song (with vocals) that's even more progressive than "The Crusade" (though not as technically difficult to perform, which is part of the reason "The Crusade" was an instrumental to begin with, according to Word Of God).

In Waves was released in 2011 and was more of a return to the style seen in Ascendancy rather than the previous two albums. It was the first album recorded with drummer Nick Augusto, who had replaced Travis Smith. The album saw the departure of the 7-string guitars, opting for the standard 6-strings in Drop-C# tuningnote Drop-D with all strings down a half-step. It was met with generally positive reception, although was criticized for being over-produced and inconsistent.

Vengeance Falls, was released on October 15th, 2013. It was also the band's last album with Augusto, who was fired in May 2014. He was later replaced with Mat Madiro in July. Their latest album, Silence in the Snow, was released on October 2, 2015. It is also their only album with Madiro as he was later replaced by Paul Wandtke in December. Wandtke himself lasted almost exactly a year and was let go of around the very end of 2016; Alex Bent is his replacement.

I'M TROPING! Troping through the feast of fire!: