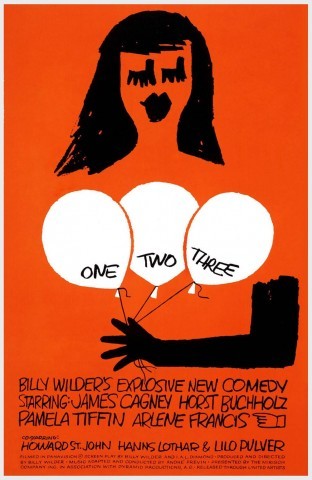 One, Two, Three is a 1961 comedy film directed and cowritten by Billy Wilder. Set in Berlin shortly before the wall was built, it's about a Coca-Cola executive in West Berlin who has to care for his boss's daughter, who's spending her holiday there. And also tries to do business with some Communists to expand Coca-Cola beyond the Iron Curtain. And finds his marriage is about to fall apart. Plenty of Hilarity Ensues.

Things seem to be going fine for C. R. MacNamara (James Cagney): Coca-Cola is doing well in West Germany, and he's about to complete a deal with the Soviet trade commission to get the brand past the Iron Curtain. Hoping this will earn him a prized position in London, Mac finds himself having to jump through one more hoop: the daughter of his boss is on a tour of Europe, and said boss insists that Mac look after her. So for over a month Scarlett Hazeltine (Pamela Tiffin) is a guest of Mac and his wife Phyllis (Arlene Francis).

Scarlett's parents have made plans to come and take her back home. Unfortunately, her new, East German husband, Otto Ludwig Piffl (Horst Buchholz), has other plans. It seems Scarlett had been sneaking out of the house the whole time she was with the MacNamaras and slipped behind the Iron Curtain to have fun on the town. Which is where she ran into the young Communist, and naturally, they fell in love... naturally. At first Mac tries to get the marriage annulled by hook or by crook, but then it turns out that Scarlett is pregnant! So now Mac must try and somehow make Otto acceptable to Scarlett's conservative, high-society parents or he'll be thrown out into the streets.

James Cagney retired from acting after making this film, although he returned 20 years later to star in Ragtime.