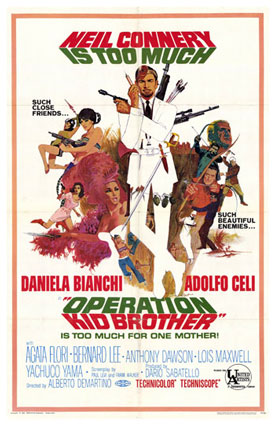 Originally titled OK Connery and released 1967 in the United States as Operation Kid Brother, Operation Double 007 is an Italian parody that cashed in on the popularity of James Bond which is known for:

The plot involves some secret information on microfilm as well as other information stored in the mind of a woman through psychic means. Our hero is brought in to save the day after the bad guys (Thanatos) nab the woman with the mental information, and kill her husband to boot. Their plan? To rule the world. Why Neil? He was the woman's plastic surgeon, and just happens to also be a skilled hypnotist who knows how to open her Neuro-Vault. Although he turns out to have quite a few other talents...